Approximately, 341 million tonnes of potatoes are produced annually worldwide. The largest producer of potatoes in the world is China with about 70 million tonnes per year, followed by Russia, India and Ukraine. Italy has an annual production of around 1,500,000 tonnes and 45% of the entire production comes out from three regions: Campania, Emilia-Romagna and Abruzzo.

The potato has its origins in Central America and it was introduced to Europe in the second half of the 1500s. It belongs to the Solanaceae family and it is an annual herbaceous plant.

Roots: the roots are both fascicled (clustered) and rhizomatic. Rhizomes are roots that are formed from changes in the stem and have the function of storing nutrients. Tubers originate from these rhizomes. However, if these come into contact with light, they will not become tubers but stems. The root system develops within 50-60cm.

Stem: ascending and rich in branches, can reach up to 1m in height.

Leaves: the leaves are pinnate and slightly furry, green in colour.

Flowers: non always visible but if they are, they are very striking, white or pink in colour.

Tuber: The tuber is the potato, the edible part of the plant that corresponds to the terminal part of the stem. The ripe tuber, reproduced in several units per plant (3 to 6 normal-sized potatoes and additional small tubers), has a yellowish skin and is rich in starch in the inner part. Tubers are propagated by tuberose, from which buds are germinating producing stems.

Climate: potato prefers a temperate-cold climate and fears intense cold. The sowing time takes place at the end of February in those areas with mild weather while in April and May in colder areas.

Soil: the ideal potato soil is well structured and has good drainage so that the roots may have good aeration. Although it prefers draining, sandy and loamy soils, we can state that it can grow without particular problems in any type of soil.

Soil preparation: Preparation begins a few months before seeding by digging a not too deep groove of approx. 20-30cm, where a considerable amount of organic fertiliser is recommended. A few weeks after the seeding, soil is hoed.

Cultivation treatments: During its growth potato needs to be earthed up.

This technique, known as “earthing up” allows the tubers to be adequately covered with soil, preventing wind and rain from causing rot and other damage. This will facilitate also a better development of underground stems that will bear potatoes.

When the plant is approx. 10cm tall, we need to draw the gathered soil into mounds around the stems of the potato plant using the hoe. This process needs to be repeated 3 or 4 times per season. Potatoes are sensitive to waterlogging, so it is good practice to pay attention to this.

There are many varieties of potatoes on the market, which differ in different characteristics such as colour, shape, taste and consistency.

They are characterised by a powdery flesh that tends to flake when cooked. This variety is rich in starch, which is why it is widely used in cooking for the preparation of soft dishes where the potato acts as a binder.

Potatoes of this variety are small in size and are characterised by their red skin. The flesh of red potatoes is white and stays firm throughout, even after long cooking time. They can be roasted or cooked in a stew.

They are called in this way because they are harvested before they are fully ripe, so they are small in size and their flesh is quite tender. They are characterised by a thin skin and a delicate flavour. They are low in calories, unlike other varieties.

Commonly called sweet potatoes due to the sweetness of their flesh. They have an elongated shape.

They are characterised by the black colour of both the skin and the flesh. The skin is thick so it is necessary to peel it before consumption. The shape is elongated and small while the flesh is floury. They are used in conjunction with yellow potatoes to give them more texture and to create more inviting dishes.

Thanks to precision irrigation you can improve crops’ productivity and, at the meantime, sensitively reduce the use of water resources. Download our guide to find out all the benefits of drip irrigation. You will find an example of drip irrigation system designed by our agronomists. 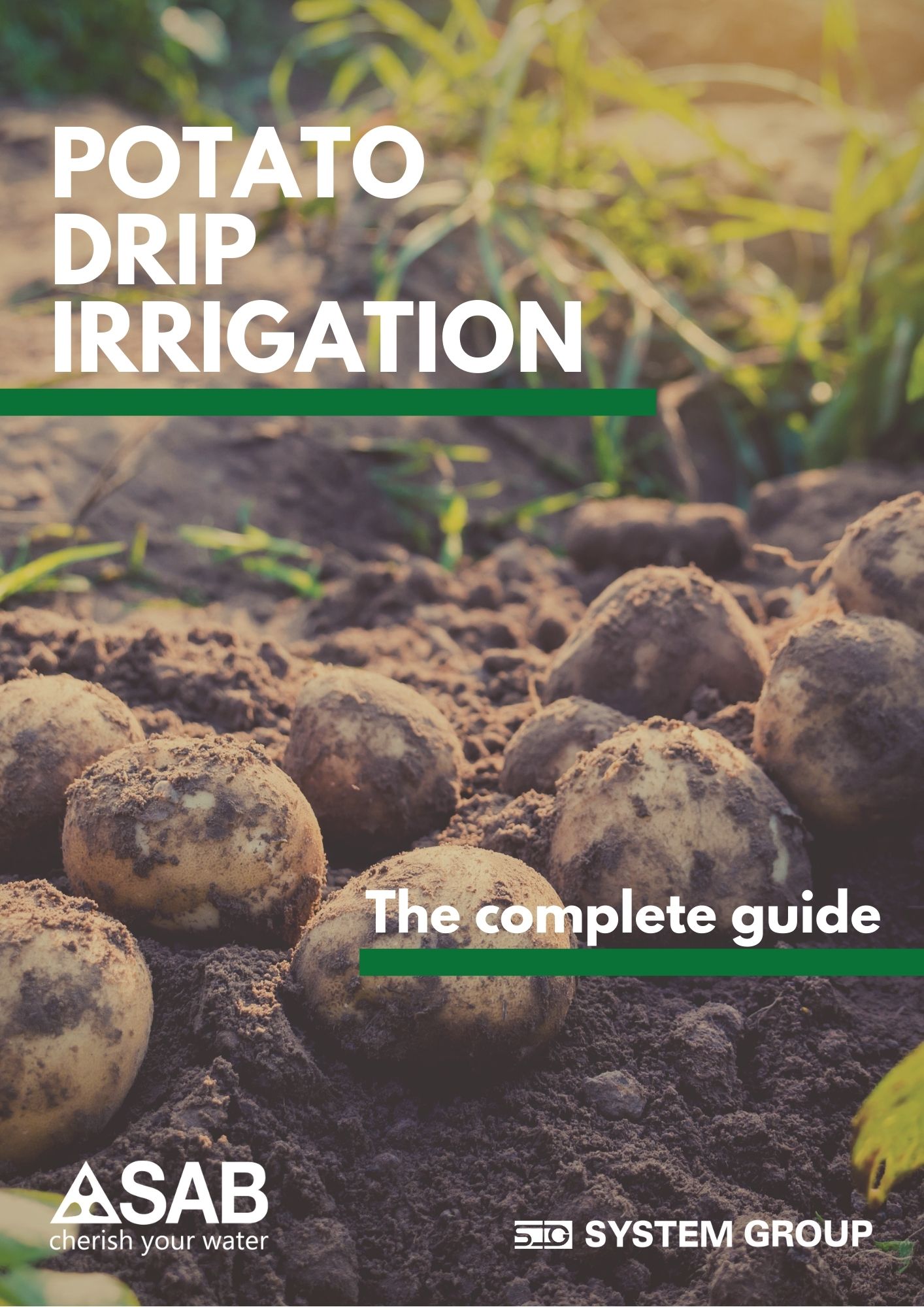 The importance of water in potatoes and drip irrigation

Water influences the yield and the qualitative outcome of the potato, therefore, it is essential for all the plant development processes. It is important to avoid water stress in potatoes, especially during sprouting and tuberisation, in order to avoid negative consequences on the development and immediate production decrease.

The figures show how effective drip irrigation is, particularly when used on a constant daily basis. Much more potatoes per plant are obtained, resulting in higher quality and less waste.

Irrigation water increases its efficiency on the crops as the frequency of irrigation increases. In order to increase our system efficiency, it is recommended to irrigate more frequently but with lower flow rates, also to optimise water consumption.

Thanks to precision irrigation you can improve crops’ productivity and, at the meantime, sensitively reduce the use of water resources. Download our guide to find out all the benefits of drip irrigation. You will find an example of drip irrigation system designed by our agronomists.

Do you need to design your drip irrigation system?

Find out our tool and get the answer just in 30 seconds!