Thanks to its many uses, maize is the most widely produced cereal in the world. For example, around 850 million tonnes of grain maize alone are produced annually on 162 million hectares, with a yield of 5.2 t/ha. In Italy, yields are often well above 10 t/ha. The largest maize producers are United States and China, which together contribute for the 37% and the 21% of world production, respectively.

Maize (Zea mays L.) is an annual plant belonging to the Maydeae of the Poaceae family.

Roots: the root system spreads out in width and remains very superficial. However, in optimal conditions it can reach up to 2m in depth.

Stem: made up of a series of internodes, it varies in height from 50 cm to 6 m; on average it is about 2 m high.

Leaves: arranged in two opposite rows on the stem nodes. They have a laminar shape and an average length that ranges from 30 to 150cm.

Climate: prefers warm climates and requires high solar radiation. Temperatures below 10°C and above 45°C may cause growth interruption.

Soil: Corn is a plant which adapts well to all types of soil so its growing needs are minimal. However, maize prefers a draining and, if possible, sandy and rich in nutrients soil. For this reason, significant organic fertilisation with mature manure is often associated with high yields.

The first, also known as traditional preparation, is characterised by a deep tillage of the soil that allows water drainage and aeration of it, followed by a refinement process.

Biological cycle: the life cycle of maize can be divided into three main phases: germination and rooting, vegetative development, flowering and ripening. The whole cycle has a total duration of about 130-150 days, which may be shorter in short-cycle varieties or longer in long-cycle varieties.

Maize has many uses, it is consumed as a food, it is also widely used in zootechnics for feeding animals on farms, it is used in industry for the production of flour and starch and finally it is also used as an energy source in biogas.

The main categories of maize include grain maize and fodder maize.

Maize varieties are specifically selected for the production of grain maize spikelets. Once the maize has reached maximum growth, it is harvested by picking the cobs with specific machines. After this process, cobs can be directly commercialised or shelled. The grain will then be treated according to use.

It can be subjected to brine processes for preservation and sale, it can be dry-milled to produce flour and wet-milled (immersed in water) to produce starch or it can be selected for animal use.

The varieties used in fodder production are selected not only to give a good grain yield but also to produce an important amount of biomass.

Thanks to precision irrigation you can improve crops’ productivity and, at the meantime, sensitively reduce the use of water resources. Download our guide to find out all the benefits of drip irrigation. You will find an example of drip irrigation system designed by our agronomists.. 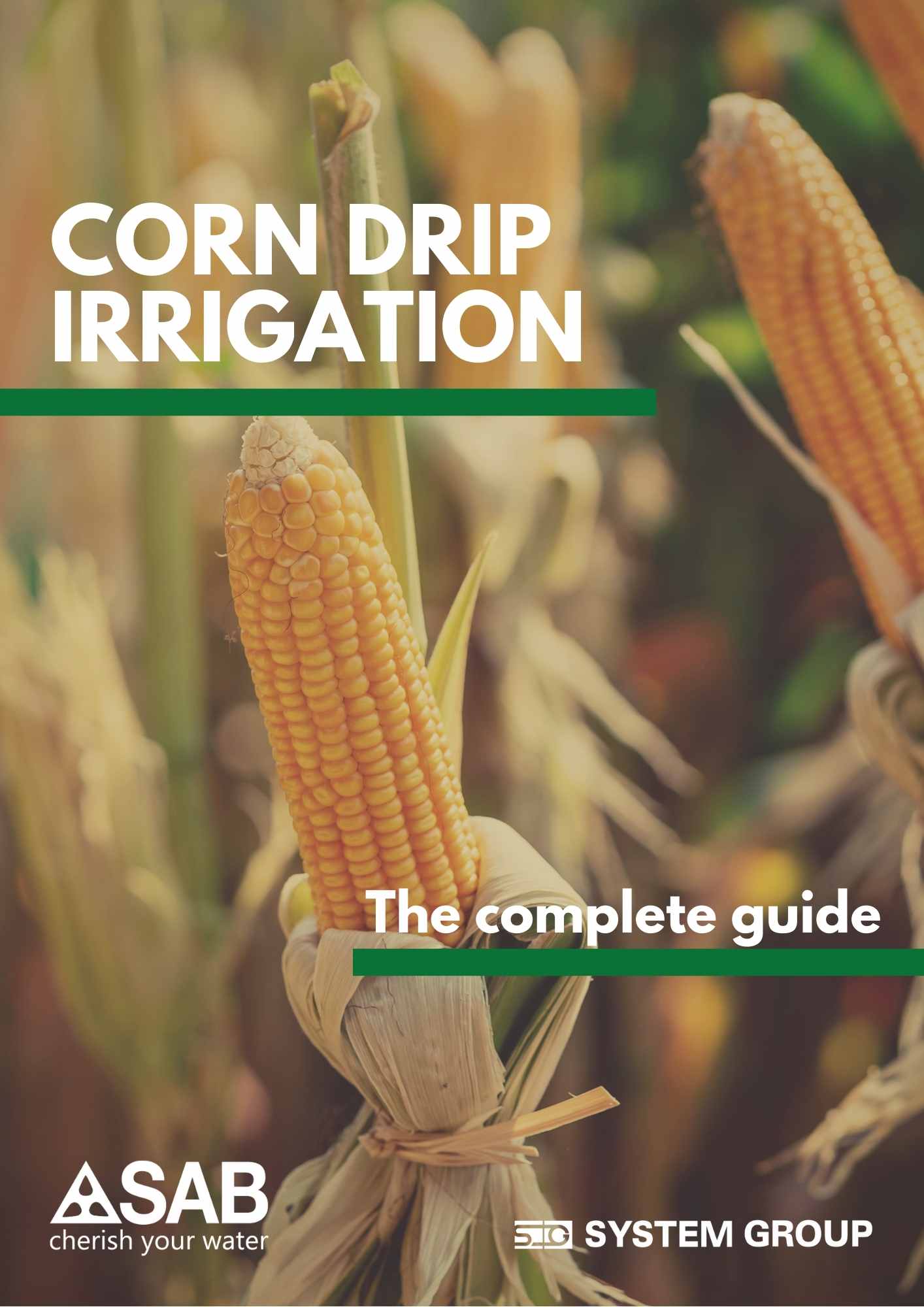 In the vegetative stages up to flowering, maize has the greatest need of water and is therefore more likely to suffer from prolonged water stress if there is not enough rainfall or if the irrigation system is not used properly.

Water stress can result in up to 8% loss of production for each day of water shortage, leading to an overall yield reduction of up to 50%.

As we have stated earlier, avoiding water stress in the plant’s development is an absolute priority. In this sense, drip irrigation can be considered an ideal solution. This is demonstrated by a study conducted by University of Padua in collaboration with the Piave drainage consortium. The study compared a drip irrigation system, a sprinkler system with a hose reel and a pivot system. The test was conducted on a farm in the Piave area in spring 2015 until harvesting in September 2015. Research has shown that drip irrigation is the only irrigation technique that has been able to avoid water stress without over-watering.

Comparing this technique to pivot irrigation, although the latter made up for water shortages by avoiding hydric-stress, it has also delivered about 37% more water than needed. Drip irrigation has also given the best production results with 11% more growth than pivot and 15% more than hose-reel irrigation. In the end, drip irrigation proved to be much more profitable for maize.

The benefits of drip irrigation on maize crops

Drip irrigation provides many advantages in production, quality and yield of both varieties i.e. grain maize and fodder-biomass maize.

A four-year experiment (2012 through 2015) was carried out in China, which has demonstrated the efficiency of drip fertigation. A field was selected and divided into three different areas:

This marked increase was particularly evident in 2014 and 2015 where fertigation was much more effective than conventional fertilisation by 53% and 31% respectively.

Another positive effect of the two most advanced techniques was an improved vegetative development. The leaf blade of maize in the year 2014, if we compare the conventional technique to the two others, was 79% larger with drip irrigation and 124% larger with fertigation. The drip system is very advantageous, especially in the driest periods because it has the ability to compensate for water shortages during the most critical phases based on the real needs of the plant. In addition, with this system you will obtain much more vigorous and with higher commercial value yields.

Thanks to precision irrigation you can improve crops’ productivity and, at the meantime, sensitively reduce the use of water resources. Download our guide to find out all the benefits of drip irrigation. You will find an example of drip irrigation system designed by our agronomists..

We use cookies to make sure you can have the best experience on our site. If you continue to use this site we will assume that you are happy with it.OkNoRead more